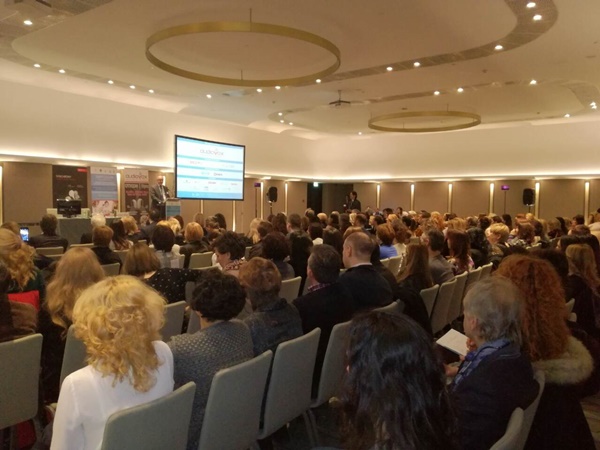 I symposium called ‚‚Current trend in the treatment and rehabilitation of partial hear loss and hearing-loss‚‚ with the multinational audience was held on 10th and 11th of March 2017. In Crown Plaza in Belgrade.

It was accredited with 10 points for the lecturers and 6 points for the audience, and the cause was the 50 year anniversary of the Center for audiological rehabilitation of the ORL Clinic, MFH of the Clinical Centre of Serbia. Around 230 ORL doctors visited from the country and beyond. The lecture attended almost all ORL doctors from CKS, CBC Zvezdara, Dr. Dragiše Mišovića as well as doctors from Smederevo, Šabac, Loznica, Montenegro, Slovenia, Macedonia. Beside them, there were pediatrist experts (Pančevo, Bgd). Lecturers were prominent in their lines of studies, professors: N. Arsović MD, D. Dankuc MD, D. Đerić, B. Mikić, Z. Komazec, S. Babac, J. Ječmenica, Z. Dudvarski, Lj. Čvorović, and a lot of lecturers form the other countries (UK, Hungary, Lithuania, USA, Croatia, Romania, Germany…)

AbelaPharm showed support for the symposium and presented Propomucil, Bulardi and Flobian. All doctors reported positive experiences with Bulardi.  Great number of them had good experiences too with PropoMucil sprays, syrups and sachets and have praised the efficacy of these products.

This website uses cookies to improve your experience while you navigate through the website. Out of these, the cookies that are categorized as necessary are stored on your browser as they are essential for the working of basic functionalities of the website. We also use third-party cookies that help us analyze and understand how you use this website. These cookies will be stored in your browser only with your consent. You also have the option to opt-out of these cookies. But opting out of some of these cookies may affect your browsing experience.
Necessary Always Enabled
Necessary cookies are absolutely essential for the website to function properly. This category only includes cookies that ensures basic functionalities and security features of the website. These cookies do not store any personal information.
Non-necessary
Any cookies that may not be particularly necessary for the website to function and is used specifically to collect user personal data via analytics, ads, other embedded contents are termed as non-necessary cookies. It is mandatory to procure user consent prior to running these cookies on your website.
SAVE & ACCEPT